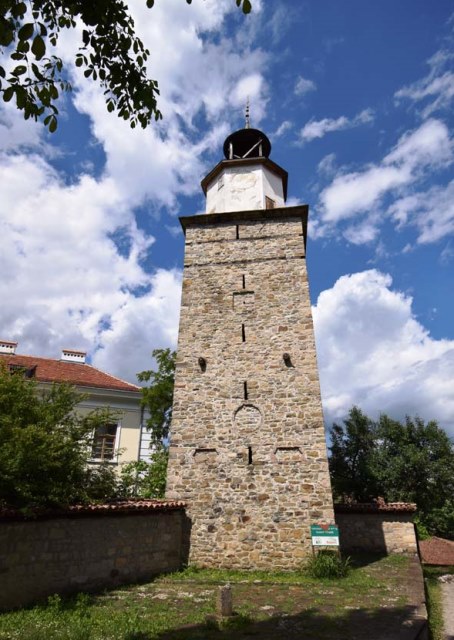 The construction of clock towers in Bulgaria began in the 16th century and to this day they remain an emblem of the town or village they are in. These clock towers carry many memories of days gone by. One of the most beautiful and interesting cultural monuments in Elena is precisely the Clock Tower. It is recognised as a cultural monument of national importance. A special place was chosen for its construction so it can be seen from every part of the mountain town.

There are over 50 clock towers in Bulgaria and only 15 of them are older than the one in Elena which has a history of nearly 210 years. In older times, its bell heralded historical events and the arrival of important guests in the mountain town. It is known that the clock tower in Elena was built in 1812 and that its bell was placed on Enyovden a.k.a. Midsummer’s Day. However, the name of the builder remains unknown. Until recently, it was not known who fortified the tower in 1953, a fateful year for the clock tower. Today, at the place where the symbol and pride of Elena rises, there would have been a metal sign with a short text if it weren’t for an exceptional master-builder – Stefan Dotsin.

In the centuries-old history of the Clock Tower, there is something else, no less interesting. For the last 35 years, one family has done the maintenance of the mechanism and the winding of the clock every 24 hours. 12 gears, 15 rollers, springs, pins and a bunch of other parts must move in full synchrony so that there is no delay or haste from the right time.

Speaking of families, another interesting emblem of Elena are the 5 Razsykanovi or Hadjidimitrovi houses. They are a cultural monument of national importance and an extremely interesting architectural ensemble of five houses. They were built by Hadji Dimitar Razsykanov for his four sons. The wide eaves of all five houses form a sort of line that follows the curved street line. The houses were built at the end of the 18th century and the beginning of the 19th century. The facade of each of them is harmoniously connected with that of the neighbouring buildings. Each house has its own architectural solution which distinguishes it from others and gives it its’ special beauty. And now you have the amazing opportunity to take a walk in one of these houses.

What is more, this unique house is up for sale. So if you’ve ever wanted to own a piece of history do not miss this amazing opportunity. You can find the house on Yantra Homes site.