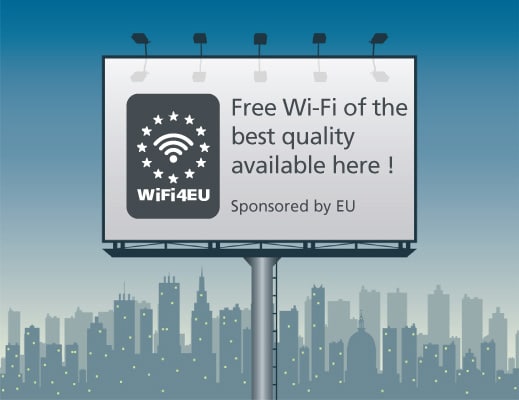 A total of 13 public places in Veliko Tarnovo will have free internet access thanks to the WIFI4EU project by the European Commission.

These places are Tsar Assen I Square in front of the Tsarevets Fortress, the panoramic terraces on Stefan Stambolov Street, the Asenevtsi Monument, the Saedinenie Square in front of the Revival and Constituent Assembly Museum and the Mother Bulgaria Monument. This will allow the many tourists that visit these historic sites to easily share their photos online with family and friends. What is more, free access to internet for guests and residents of Veliko Tarnovo will also be provided at most of the parks in the city – Marno Pole, Nikola Gabrovski, as well as parks in the neighbourhoods Buzludzha, Zona B, Cholakovtsi and Akatsia. Free internet will also be available in the area near the Resurrection Church and the newly built playground in Kartala.

The establishment of these free internet access points is part of the European Commission’s WIFI4EU project. Thanks to that project the municipality of Veliko Tarnovo received funding of € 15,000 for the construction of high-speed wireless Internet in public places. In addition to Veliko Tarnovo, other municipalities that received funding are Lyaskovets, Pavlikeni and Svishtov. In mid-January, Pavlikeni launched its public network which covers Svoboda square, the city zoo and the park Kiril Rakarov. For several months now such a network has been operational in Svishtov as well, covering the municipal market “Veleshana”, Aleko Square, the City Garden, the area around the Donors’ monument and Svoboda Square.

The free internet access network in Veliko Tarnovo is expected to be operational by mid-year. This is just one of the many improvements the municipality has planned for the city crowned historical and spiritual capital of Bulgaria.