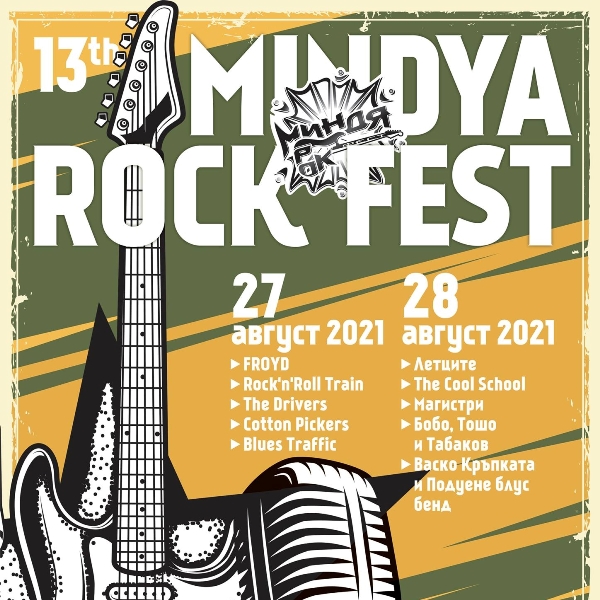 Mindya Rock Fest returns at the end of August

Mindya Rock Fest returns to the square in the Veliko Tarnovo village of Mindya. After last year’s secret concert, which due to the pandemic was held without the usual large audience from all over the country, this time fans of the event will be able to enjoy a traditional edition of the music marathon. It will be within two days at the end of August and will include the participation of 10 groups.

On August 27th, the musicians from “FROYD” will be the first to appear on the stage. They will be followed by “Rock’n’Roll Train”, “The Drivers”, the Serbian band “Cotton Pickers” and “Blues Traffic”. The next day the spectators will be able to see the groups “Letsite”, “The Cool School”, “Masters”, “Bobo, Tosho and Nikolai Tabakov” and Vasko Krapkata with “Poduene Blues Band”. The 13th edition of Mindya Rock Fest is organized by the foundation of the same name, whose members are Prof. Evgenii Daynov, Borislav Mavrodiev and the chairman Stanimir Gabrovski. The event is realized with the support of the Municipality of Veliko Tarnovo, Chitalishte “Razvitie” in Mindya and sponsors.

Now for a little bit of history – Mindya Rock Fest is the most popular free rock and blues festival in Bulgaria. It started in 2009 and is held at the end of every August in the village of Mindya, Veliko Tarnovo, in the northern part of Stara Planina. The initiator and main organizer is the famous political scientist Prof. Evgenii Daynov, who also plays in one of the participating bands. Co-organizers are locals. In the first years, funding was provided only by sponsors and sponsoring companies. Since 2011 the Municipality of Veliko Tarnovo has been financing an increasing part of the costs. The festival is a cultural event that brings together people of different backgrounds – residents of small towns and the capital, Expats and Bulgarians and more.