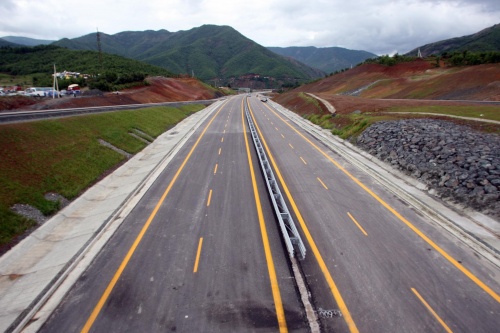 A total of 10 meetings took place between November 28th and December 1st……The subject of the public debates was the Environmental Impact Assessment Report of the investment proposal. On November 28 was the discussion in the municipalities of Pavlikeni, Gorna Oryahovitsa and Veliko Tarnovo, and on November 29 in Polski Trambesh, Tsenovo and Byala. On 30 November the report was presented to the residents of Borovo, Dve Mogili and Ivanovo. On December 1 was the discussion in the municipality of Ruse. 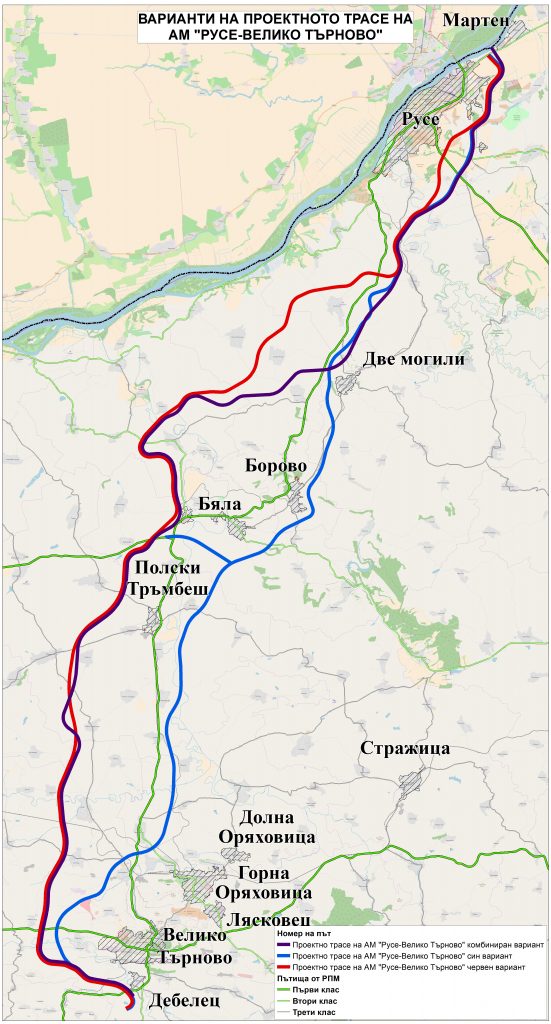 The meeting in Gorna Oryahovitsa on Tuesday was attended by representatives of the largest businesses in the town, including Zaharni Zavodi, Arcus, Prity etc. There are strong arguments from these local businesses who are lobbying in favour of the “Blue” route as it passes the closest to their town. They argue that the route selected should be the one that passes as close as possible to the town. Gorna Oryahovitsa has the largest railway junction in the country, there is a regional airport as well as a major customs facility. The “Blue” option is the closest and is also the shortest route at 105 km, but it has the highest environmental impact and whilst construction is not prohibited, it is certainly an area that should be protected. The combined route is preferred by the API, it is 133 km long, has less impact on the environment and would have the lowest construction cost, but its connection to the current highway would be close to Momin Sbor, 12 km west of Veliko Tarnovo and 25km from Gorna Oryahovitsa.

The meeting in Gorna was also attended by another infrastructure company which presented an alternative proposal, which is largely a variation of the Blue route. Also passing close to Gorna Oryahvotsa, but includes a tunnel under Arbanasi to shoten the connections to the south. The representative of the company reminded the attendees that “a shorter route means less costs and less harmful emissions on the basis of which charges will be paid in the near future”. The MP Yavor Bozhankov stressed that the EU directive on the construction of such roads recommends taking the shortest routes and passing close to major centres that can provide different types of transport, such as Gorna Oryahovitsa.

The representative of Zaharni Zavodi, the largest sugar factory in Bulgaria, claimed that if the connection to the Ruse-Veliko-Tarnovo-highway is longer and the overall travelling time for them is an additional 40-60 km , their annual costs would be about 2 million levs higher. He also stated that “Gorna Oryahovitsa is the industrial heart of the Veliko Tarnovo district, so we hope that this will be taken into account and the connections that will be built will be shorter”. The CEO of Prity was also categorical that companies would have less costs and cheaper production if they did not give extra money for transport.

The chief of Police, was categorical that if the combined route is selected, as preferred by the API, it would not alleviate the problem of heavy vehicles passing through the villages from the highway at Polski Trambesh. They would continue to use the existing route to reach the customs office in Gorna Oryahovitsa.

According to the mayor of Polikraishte, if the Red route is selected, most of the traffic will continue to run on the old road between Ruse-Veliko-Tarnovo-Highway, instead of going to Veliko Tarnovo and then Momin Sbor to enter the new highway. The consensus was that even if the “blue” option is more expensive, it is the most convenient for everyone and will be repaid quickly because of the lower harmful emissions and costs. The participants of the Gorna Oryahvitsa meeting are adamant that if the Blue route is not selected, then they were all determined to fight in the court.

Debate, speculation and arguments continue for now, but VT-Today will try to keep you informed of updates for Ruse-Veliko-Tarnovo-Highway as they become available.

Sources for this article included the Official website for the Agency “Road Infrastructure” and local newspapers Yantra Dnes and Borba.

Two new orders of the Minister of Health coming into force today.