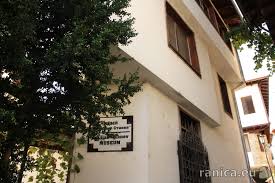 Emiliyan Stanev Museum House is located at the beginning of the narrow Nikola Zlatarski Alley, close to the Samovodska Charshia square in Veliko Tarnovo. It was built on the same plot where the original house, where the writer was born in 1907 and lived until 1922, when he and his family moved to the town of Elena.

The museum was opened in 1987 celebrating the 80th birthday of the writer. The artistic design of the house was developed by the film director Valo Radev. The museum complex consists of two opposite buildings, one of which preserves the entire archive of Emiliyan Stanev. The writer’s personal library contains about 1400 books. Some of them are rare editions and some are signed by famous scientists, writers and translators. The library also contains fiction, memoirs, art history, literary history and criticism. Around 30 per cent of the books are in foreign languages.

The second building features an exhibition arranged in non-standard, expressive and synthetic way with the help of some AV devices. His original Sofia study is restored here, as well as his family tree. There is also a photo-collage of the writer depicting him in different ages of his life. You can also see his notebook with the manuscript of the novel Legend of Sibin, Prince of Preslav and his Remington typewriter, which he used in typing all his book and which formerly belonged to another notable Bulgarian writer – Svetoslav Minkov.

In the beginning of 2013, Emiliyan Stanev Museum House received 10 hours of recordings of conversations of the writer, made in 1975 and 1976 during a literature survey.

Museum working hours: Tuesday through Saturday from 9 a.m. to 5 p.m.