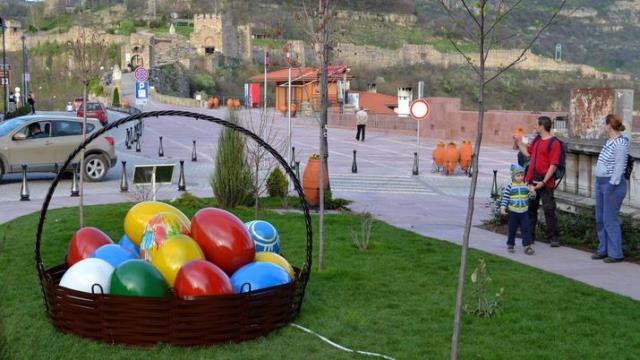 Easter in Veliko Tarnovo will be celebrated in Tsarevets fortress

After a three-year break, the brightest Christian holiday – the Resurrection of Christ, will be again celebrated in Veliko Tarnovo on top of the Tsarevets fortress. Exactly at midnight on April 23-24, dozens of church bells will ring the old capital city, and the beneficent fire will be carried out by the Patriarchal Museum of the Ascension. An Easter service will be held in front of the historic church.

The gates of Tsarevets will be open at 10.30 pm on Holy Saturday (April 23), and the church service will begin at 11.30 pm. With the removal of the fire of grace at midnight from the Patriarchate will begin a liturgical procession with torches, which will continue to the Cathedral of the Nativity of the Blessed Virgin. The mayor of the old capital Daniel Panov, who traditionally celebrates the Resurrection of Christ together with the people of Veliko Tarnovo, will also take part in the procession. At 1.00 am on Easter night, the Holy Liturgy will begin, which will be celebrated in the Cathedral of the Nativity of the Blessed Virgin.

At 11.00 on Sunday (April 24) is the service on the occasion of the Second Resurrection in the church “Resurrection of Christ”. After the service, consecrated Easter eggs and Easter cakes will be distributed.

At 9 pm on Easter the audiovisual performance “Tsarevgrad Tarnov – sound  and light” will be broadcast. The screening can be watched from Tsar Asen I Square.

On the eve of Easter, the emblematic church “St. St. Cyril and Methodius ”shone in bright light from the highest point of Veliko Tarnovo. Built by Kolyu Ficheto, the church is his first construction, with which the master is titled as an architect. The initiative to illuminate the church belongs to the newly established association “Veliko Tarnovo – historical and spiritual capital of Bulgaria” and is his first pilot project.

This is one of the many initiatives that they plan to implement for Veliko Tarnovo. The lighting is already a fact and in the evening the temple can be seen from the main street and from the old town.

All lighting fixtures are installed at a distance, in the green areas around the temple and there is no interference on the building itself. Unfortunately, this church, as well as other city temples need urgent and serious repairs and the Association will work in this direction.

Enjoy the Sound and Light Show with a glass of champagne