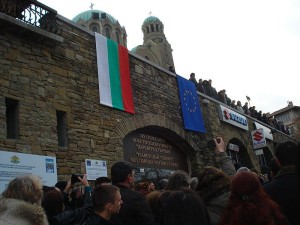 The day of the grand opening

Because of the great interest Tsarevgrad Tarnov Multimedia Visitor Centre, known as the Museum of wax figures from the Second Bulgarian Kingdom, is to grow with 2 more floors, Borba Newspaper reported.

The expansion will cover nearly 1000 sqm. The additional space will allow for more mock-ups of people, events and scenes related to our history to be presented, said the Mayor Daniel Panov.

The Multimedia Visitor Centre, which was officially opened two years ago, quickly became one of the most visited sites in Veliko Tarnovo. The construction of the wax museum cost nearly 1million leva; the expansion is expected to reach the same amount. During the first month of its existence the museum was visited by more than 50,000 people. Although the site is referred to as the wax museum the natural-height figures are made from polyester raisin, wax, silicone, and plaster.

Tickets cost 10 leva for adults and 5 leva for students and pensioners. Kids up to 7 years old go for free as well as students studying at schools in Veliko Tarnovo area. There are also various discounts for large families, as well as a combined ticket to visit the churches of Saint Ivan Rilski, Saints Peter and Paul and the Tsarevgrad Tarnov Multimedia Visitor Centre.