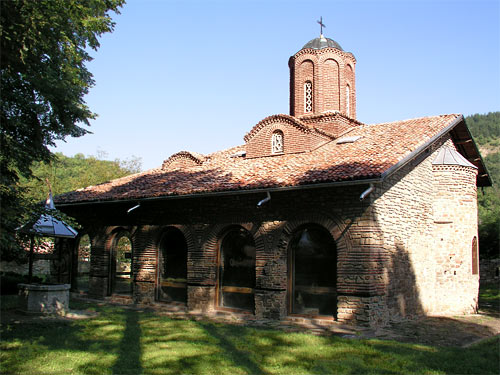 St Peter and St Paul Church is located on the northern foot hills of Tsarevets Hill. It is one of the few medieval churches preserved and working since the beginning of the 18th century to the earthquake in 1913.

The church was built during the reign of Tsar Kaloyan. In 1204 he signed a treaty with the Roman Pope Innocent III, which is why the church was named after most respected saints of the Roman Catholic Church – Peter and Paul.

Later a monastery complex was developed around the church, built with donations from Ana-Maria, wife of Tsar Ivan Asen II. The last Bulgarian patriarch served there for two years.

The murals on church wall were painted by an artist, who had a vast knowledge of  the Paleologue style and the traditions of the Artistic School of Veliko Tarnovo.

A lot of the images are unique and unparalleled compared to other wall-paintings in Bulgarian medieval churches. These murals are some of the fine displays of mastery of the Artistic School of Veliko Tarnovo.

The St Ivan Rilski (Ivan of Rila) Church is part of the St. Paul and St. Peter Church complex. It was unearthed and explored by local archaeologists and exhibited  thanks to an EU-funded project in the beginning of 2013.

Free rides on the Christmas bus during the weekends