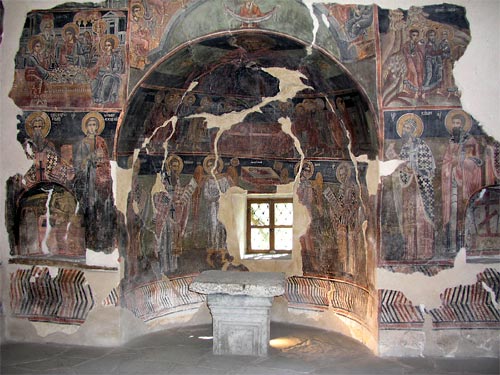 The Church of St. George is located at the east foot of the Trapezitsa Hill, on the right bank of the Yantra. It is a massive stone building sized 11 by 5 metres with one nave, one apse, a little narthex and semi-cylindrical vault. The current church was built in 1616 on the foundations of an older church, which was probably active during the Second Bulgarian Kingdom, when Tarnovgrad (the old name of Veliko Tarnovo) was the capital.

the frescoes are easily perceiver and not complicated. The central conch is occupied by the fresco called “Holy Mother of God Larger Than Heaven” and “The Descent of the Holy Spirit upon the Apostles” above it, as well as “The Eucharist” (The Communion) below it.

On the first row of the north and south naos (inner chamber of the temple) you can see depictions of St. Demetrius, St. George and St. Theodore Thyron, St. Theodore the Stratelates and others. The western walls bear images of female saints, the most prominent of whom is St. Petka (Paraskeva).

The Church narthex contains elements of two layers of paintings, depicting different scenes from the Bible.

The church had been restored between 1968 and 1971 (conducted by architect Boyan Kuzupov). The church now operates as a museum and is open for visitors 9 am – 6 pm