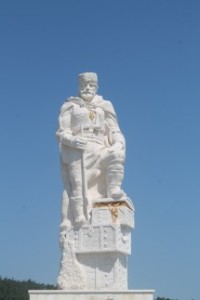 The statue of Valchan Voyvoda

A monument of the legendary Valchan Voyvoda (military commanders of Slavic populations) was officially open last Saturday in the village of Rayuvtsi in Elena Balkans. This is the only monument of the famous haydutin (a romanticised hero figure who steals from, and leads his fighters into battle against the Ottoman Empire). The memorial statue is full-length and made of white stone; it towers over Yovkovtsi Reservoir at Valchova Polyana (meadow). Valchan is one of the most famous Bulgarian rebels who devoted 80 years of his life to revel activity. All the money which Valchan Voyvoda obtained was given away for the liberation of Bulgaria and education of the Bulgarian population. He was born on January 7th, 1775 and died on March 23rd, 1879 at the age of 104. 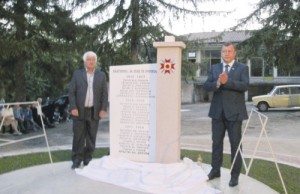 The memorial monument in Dimcha

A memorial monument for the Bulgarian heroes fallen in the wars between 1912 and 1918 was also unveiled at the village of Dimcha. The Mayor Stefan Prokopiev held a short speech in which he reminded that during that period more than 550 soldiers, non-commissioned officers and army officer from the Pavlikeni area died. The Mayer also noted that the realization of the monument was something the locals hoped for during the last 50 years.

Meanwhile, almost 70 years after the first football match was played at the stadium in the Dryanovo village of Tsareva Livada, the sports field is to operate again. The stadium was officially opened last week – on 28th August. The project for the renovation of the place was funded through Program for Rural Development 2007-2013.