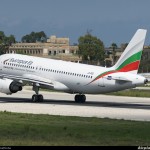 The secretive investor willing to operate the Gorna Oryahovitsa airport, near Veliko Tarnovo, was disclosed to be an American. The foreigner wants to run the airfield for the next 35 years. The investor owns the Geri Holding Company operating primarily in Italy.

The businessman deposited his investment plan last October; reportedly he will put 14 million euro towards the airport and will open between 350 and 400 new jobs. The newly employed staff will undergo training and will acquire the needed qualification in Italy. The investor is said to intend to set up an aircraft maintenance and repairs hangar.

The American entrepreneur also shows interest in agricultural land around Polikraishte where, according to the leaked information, he will built greenhouses and will export the ready produce with his own planes. Cargo flights will be in the focus of the new airport concessioner as well.

The managing team at the airport confirmed that representatives of the Italian company have visited the airport to collect up-to date information about the state of the airport.

The largest town park in Veliko Tarnovo springs back to life